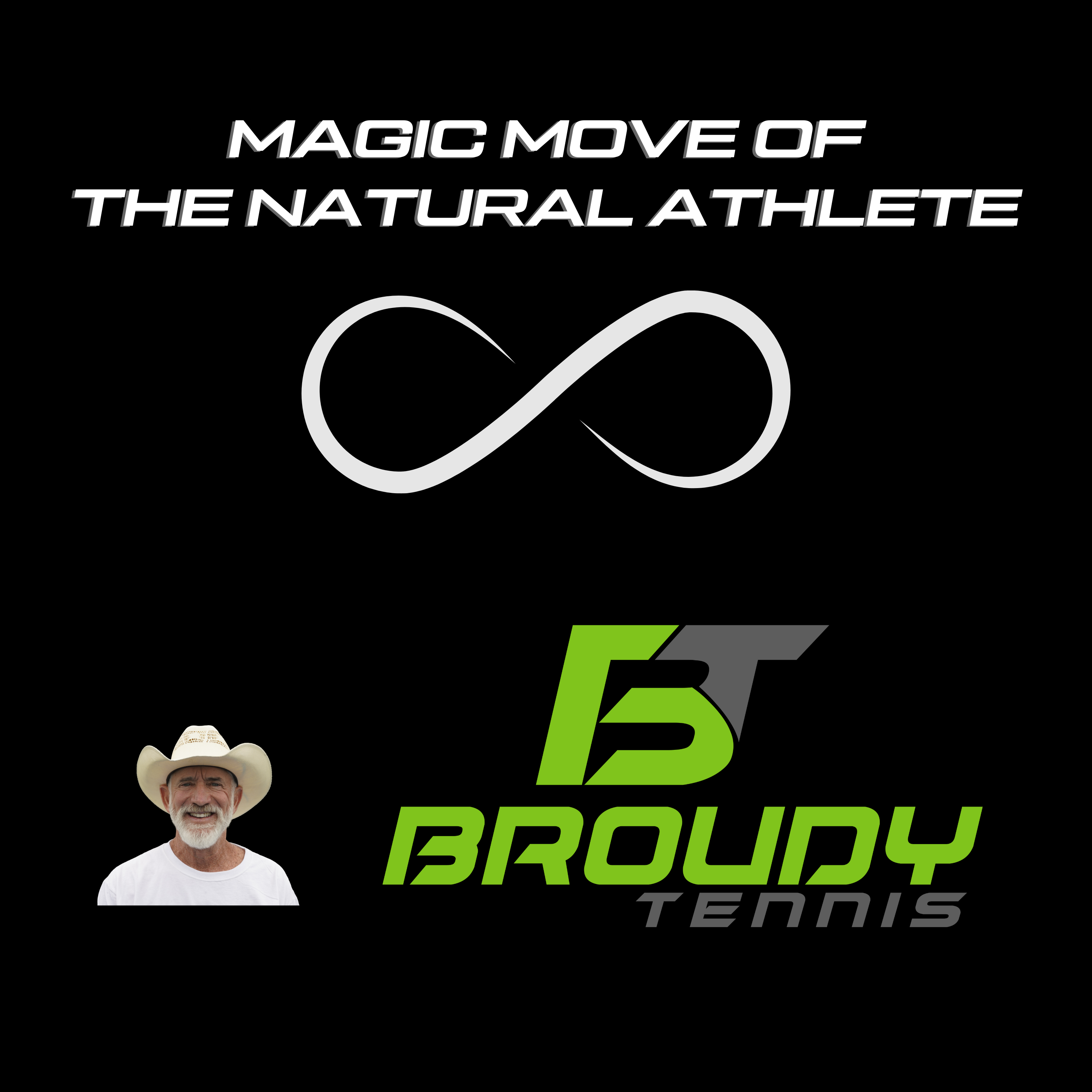 The Figure 8 “Magic Move” of the Natural Athlete

There is a particular body motion in almost every sport or physical activity that a gifted athlete performs intuitively. They know it by ‘feel’, or as being ‘in the zone’. People call them a ‘natural athlete’. But this specific body motion goes completely unseen by those of us watching. Even many tennis coaches, tennis trainers, and tennis instructors can’t identify it.

But the athletes’ entire body is engaged in the most efficient, fluid, and seamless flow of motion, resulting in what appears to be effortless power, control, and grace. This unseen dynamic motion and balance is what makes the greatest athletes stand out from the rest.

However, this unique motion is NOT exclusive to top athletes. It can be learned by virtually anyone. And it can be seen in all graceful or natural motion - from a dancer or martial artist, to a waving flag, or a cracking whip. In fact, even a baby uses this same motion to roll over, or when learning to crawl.

Inspired by the works of 20th century scientist and mathematician Rudolf Steiner, it became apparent to me that this particular motion is the ‘mother-form’ of all natural movement, and in particular all ‘natural’ athletes. I also realized it can be learned by anyone.

So, let’s take a look at what this ‘dynamic motion’ is all about.

To start, whether throwing or kicking a ball, swinging a bat, swinging a racquet, a golf club, etc., most good athletes know that a tremendous amount of speed and power can be generated without ever having to move their arms or legs. They do it through simple core-body rotation, which in turn creates coordinated centrifugal force and inertia. This works much the way an Olympic athlete throws a discus. The power and swing is initiated from the core.

Just as a record on a record player moves exponentially faster at the outer rim as compared to the inner, or a water-skier at the end of a tow-rope can go much faster than the boat, so can an athlete generate power and speed just by rotating his body, hips, and shoulders - while their arms or legs remain relatively relaxed.

However, the ‘gifted’ or ‘natural’ athlete, whether they realize it or not, rotates their core quite differently from a ‘good’ athlete, thus causing a noticeably different motion throughout the entire body. Which, in turn, also causes them to move their arms and legs differently as well.

Unlike the simple semi-circle hip or core rotation, the exceptional athlete rotates his hips in a slow, yet continuous figure 8 path - an infinity sign. This motion causes the arms and legs to be pulled, creating a coil effect that is continuously expanding, and intensifying in energy, from the body’s core out to the apex of the throw, the hit, or even a kick.

This dynamic motion of the body, arms and/or legs is similar to that of a bullwhip, continuously and rapidly gaining speed. And when you consider that while the hand may only be traveling at 30-40 mph, the tip of the whip is actually breaking the sound barrier at over 600 mph, you will be well on your way to understanding how top athletes generate the speed and power they do. You are starting to understand ‘dynamic balance’ and the geometric principles of ‘non-linear motion.’

Whether it’s throwing or hitting a baseball, throwing or kicking a football, hitting a tennis forehand, backhand or serve, serving or spiking a volleyball, or even driving a golf ball, this same non-linear motion can be seen in every one of these movements. And it’s the same motion that can and will enhance any athletes’ performance.

Once the sports world realizes this geometric phenomenon exists, sports will once again be truly elevated to a higher pursuit of excellence: the pursuit of being ‘great’ rather than just being ‘good’.

As we saw in our previous article there is a particular ‘non-linear’ dynamic motion that is existent, and which can be seen, in all top athletes, and in every sport.

It’s a motion that, when done properly, can create tremendous speed and power with minimal effort. It’s also a motion that creates amazing balance, grace, and fluidity that make tops athletes appear to be smooth and natural.

To put it as simply as possible, just think of this non-linear motion as a figure-8, or the infinity symbol - with which we’re all familiar. And think of it on both a horizontal and vertical plane. Now, think of that figure-8 motion as the ‘engine’ or source of energy that creates centrifugal force and a resulting sine wave emanating out from it, in concentric waves.

With very little investigation, you’ll find that this ‘figure-8’ motion, or a variant of it, is actually at the core, and is the mother-form, of all types of natural movement and motion. In fact, it can be found throughout natural science – starting with the analemma of the earth.

But do a little research and look up the lemniscates of Bernoulli and Gerono. Then look up the Cassini oval, the Watt's curve, or the harmonics of the Lissajous or Bowditch curve, I think you’ll quickly see what we’re referring to.

Now, go back and look closer at the effortless form of a top tennis pro like Roger Federer. And in particular, watch the motion and rotation of his hips and core – on every one of his strokes. Or, look at the hips and core of an Olympic downhill skier, or a professional baseball player throwing or batting, even a belly dancer. Click Here to watch all the fluid figure 8 tennis strokes.

Consider the world’s smallest bird - the hummingbird. It’s the only bird in existence that can actually hover and even fly backwards. And even at its minute size, it can reach speeds up to 60 mph (96.56 kp/h). Those are incredible feats, requiring an incredible amount of power and speed from their tiny paper-thin wings. How do they do it? You guessed it. Their wings actually beat in a continuous non-linear figure-8 motion.

This same figure-8 motion, done properly, and in one continuous motion, will elevate any person’s level of performance in any sport. And any person can learn it. You don’t have to be a so-called natural athlete.

I’ll say it again. ANY person can elevate their performance in ANY sport by simply learning to do the figure-8 properly.

That may seem like a bold statement to make, but the figure-8 is the entry point to an all-encompassing form of movement. It provides more balance, more power and effortless control. It takes the centrifugal force of a simple pivot to the next level. And it ties everything together in one fluid motion.

One of the keys to the figure-8 is a slow, continuous movement, starting in the hips and emanating out to the entire body. This, in turn, furls and unravels the arms and/or legs in a non-linear fashion, producing immense speed and power, with complete control – all with very little effort.

Another key is that this motion is equally represented in both the horizontal and vertical axis, left and right sides, and concentrically moves through the entire body like a human sine wave, connecting everything into one motion.

I can’t stress enough that everything becomes connected with this single motion. Fully understanding this will lead you deeper into what the best athletes do so naturally.

People have become one-side dominant, linear thinkers, but the non-linear figure-8 can free them to perform beyond their personal limitations. It is a complete connection that will synchronize the entire body.

As seen in the second article, the figure-8 body motion is undeniably what separates the great or natural athletes from the good ones. But, more importantly, anyone can learn this “magic move” and easily apply it to their sport or activity.

Start with the proper posture, standing in a neutral position “zero point”: facing forward with your hands in front of you, feet parallel to one another shoulders width apart, toes forward, back straight, eyes looking straight ahead, knees very slightly bent. You should feel relaxed and balanced before you begin. Now clasp your hands together, all except the thumbs and index fingers, which form a “pointer” by pressing them together, index fingers now pointing the same direction as your toes. To complete this initial stage, attach your two elbows to your sides (ribs), locking your arms and fingers, creating a triangle, with your chest completing the form (far left diagram). Focus on moving continuously with balance and comfort. This  figure 8 hip rotation is easiest learned using either the Broudy Board or the Ramp.

Next, imagine there is a chalkboard directly in front of you. Using your imagination draw an infinity sign, approximately two feet in size, on this chalkboard in front of you. Move your index fingers, your “pointer”, and begin by raising them up and to the right. Continue drawing the infinity form by next rounding the corner with your “pointer” and then rising again up and to the left. Complete the infinity sign and continue slowly and continuously, without stopping to follow in this form.

Now, it is imperative to remember two things. 1. Keep your elbows attached to your hips. This assures that your feet and hips move with the movement of your fingers. And 2. As you come from “zero point” (which is the center point of the infinity sign, or the “X” directly in front of you) make sure that you rise into each turn. So you rise into each turn coming from your center, and then fall as you round the corner. Now you should be moving your entire body, like a moving statue in this continuous infinity sign, or sideways figure-8 path of motion, driven by your index fingers. You’ll notice as your hands swing from side to side in this continuous motion that your weight will alternately shift slightly from one foot to the other. Simultaneously you’ll begin to feel the muscles in your abdomen working to bend and straighten while your body twists and straightens throughout the movement.

Once you can perform this sideways figure-8 motion, or infinity sign, begin to initiate the motion from your core, centered in your hips and abdomen. Feel how it’s your “center” that “pulls” at the arms and legs, dragging them behind. It’s this flow emanating from the hips to your extremities that is the magic move of a natural athlete. The core starts the motion, which is then transferred, or “ripples out” to your arms and legs. You are now doing the figure 8! If you’re not feeling it yet Click Here for a demonstration.

This feeling of a “natural throwing motion” once learned, can be applied to every sport’s motion, from hitting a tennis or golf ball to the spinning of a figure skater.

Watch a short-stop in baseball in action. He catches and throws all in one fluid and continuous motion, as natural as a fish in water.

All sports, activities and general well-being can be enhanced by understanding how the entire body interacts as a “human web”, whereby when one part of the body moves, every part of the body moves, in relationship. Once a person develops this balanced fluidity through practice, it becomes “muscle memory” and applicable to sports.

I first observed this figure 8 hip rotation back when studying the ground strokes of Andre Agassi. Here is my original article from 2000 I published in TennisOne.

If this concept and the idea of science based “flow” strikes a chord with you or you would like to find out more about our tennis system please download the free eBook The Core Fundamentals of Broudy Tennis.